Often the most exciting encounters are unpredictable though wildlife sightings vary according to season, tide and weather. Our skippers and crew will take you on a breathtaking, interactive tour of the coastline visiting remote places with the best chance of wildlife encounters.

SeaXplorer is a member of WISE and as such is an accredited wildlife safe operator. This means we care about the wildlife and how the boat integrates with existing habitats. We are careful about speed and angle of approach and ask that passengers avoid making sudden movements or noise when close to wildlife. We are there to watch – not to disturb.

What will we see? 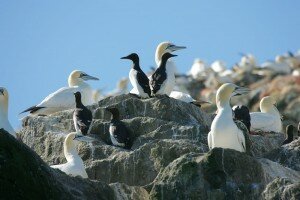 The west coast is a great place to watch birds of prey with sightings of golden eagles, buzzards, peregrines and the rare Sea Eagle can be see in their natural wild environment.

The different species of seabird that we see during our trips are far too numerous to list individually but include the Tern, Artic Tern, Cormorants, Shag, Guillemot, Razorbill, Kittiwake, Herring Gull, Gannet, Manx Shearwater, Storm Petrel, Oyster Catchers, Herons and Eider Ducks. 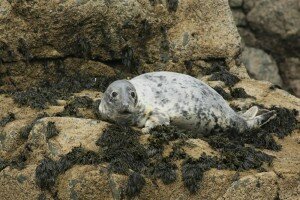 Seals sightings are plentiful and generally all year round. June to August is the best time to see new born common seal pups. Seals are naturally curious with an intelligence level similar to that of dogs. Young seals are very inquisitive and will often swim up close to the boat and we can get near to the rocky outcrops for a great photo opportunity of these beautiful creatures.

Common seals feed on a varied diet of sandeel, cod, herring, sprat, flatfish, sprat, octopus and squid. They eat around three to five kilograms of food per seal per day, and normally forage within 31 miles of their haul out site. 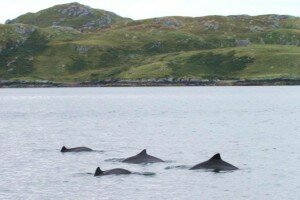 Porpoise (small dolphins) are wonderful to see and mesmerizing to watch as they dive under and close to the boat..

Porpoises tend to be smaller but stouter than dolphins. They have small, rounded heads and blunt jaws instead of beaks. Their teeth are spade-shaped, whereas dolphins have conical teeth. In addition, a porpoise’s dorsal fin is generally triangular, rather than curved like that of many dolphins and large whales.

Porpoises prey on fish, squid, and crustaceans which are plentiful in the west coast waters around Lochaber. They are found most commonly in small groups of fewer than ten individuals, referred to as pods. 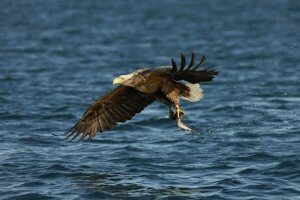 The mountainous terrain provides ideal habitat for golden eagle, so it’s worth keeping an eye on the sky!

Also known as the sea-eagle, the white-tailed eagle is the largest bird of prey in the UK and the fourth largest eagle in the world. Its wingspan can be almost 2.5metres in length, standing at a height of almost a metre.

Hunted to extinction in the 1800s, the sea-eagle was successfully reintroduced to the west coast of Scotland in the 1970s.

Other than by its size, the white-tailed eagle identifiable by a pale head, white, wedge-shaped tail and broad rectangular wings. Sea eagles are scavengers but will also hunt for fish, rabbits and seabirds.

The waters and the surrounding coastline in Lochaber provide a beautiful unspoilt haven for a huge range of wildlife.

Wild Goats can be spotted grazing on the Morven Hills, Red Deer stand majestically on the heather covered hillsides and Otters dash about on the shoreline.

Sea Otters are the heaviest members of the weasel family and also the second smallest marine mammal. Unlike other marine mammals, they do not have a layer of blubber to help them keep warm. Instead, sea otters have the densest fur in the animal kingdom, ranging from 250,000 to a million hairs per square inch, which insulates them. 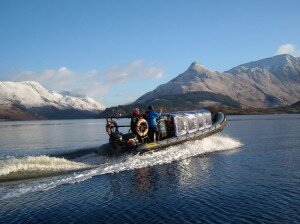 Appreciation of the landscape and natural beauty are increased as you view the surrounding area from a least well know vantage point!

The shaping of the Lochaber landscape happened over the last two million years as glaciers built up and then melted back again many times. When the climate was at its coldest, ice formed large ice caps or more extensive ice sheets that covered the country.

Glens and mountain corries were scooped out by the grinding glaciers to create arêtes, hanging valleys and U-shaped troughs. You’ll find many classic examples of glacial features in Lochaber.

The result of all this is a beautiful and facintating landscape with deep lochs and exquisite vistas all around!  Not to be missed!